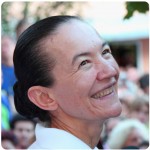 Vicka Ivankovic was born on September 3 1964. Her family grew grapes and tobacco. She has seven brothers and sisters. Our Lady first appeared to her on June 24, 1981 when she was 16 years old. On January 26, she married Mario Mijatovic 2002. They live with their two children in Krehin Gradac, about 15 minutes’ drive from Medjugorje. Vicka still receives daily apparitions from Our Lady and has received nine of the ten secrets. Our Lady asked her to pray especially for the sick. Vicka meets with pilgrims outside her old house in Biakovici, on the east side of Medjugorje, some mornings at 8 o’clock. 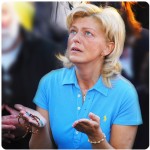 Mirjana Dragicevic was born on March 18, 1965. She has one brother. She was the second person to see Our Lady on June 24, 1981. She was 16 at the time. She married Marko Soldo on September 16, 1989. They have two children, and live in Bijakovici near the bottom of Apparition Hill. Mirjana received daily apparitions until December 25, 1982 at which time Our Lady entrusted to her the tenth secret, and promised to appear to her once a year on her birthday, March 18, for the rest of her life. Since August 2, 1987, on the second day of each month, Mirjana internally hears Our Lady’s voice. Recently, on these days, she also sees Our Lady. The apparitions had been taking place at Cenacolo, but in March, 2009, the Bishop ordered Mirjana to stay home for the event. Her special ministry is to pray for unbelievers, and those who do not yet know the love of God. Our Lady told Mirjana that she is the person to divulge some of the ten secrets intermittently through a priest. She chose Father Pero Ljubicic, OFM, to perform this task when the time comes. Mirjana gives talks to pilgrims outside her house some days of the week. 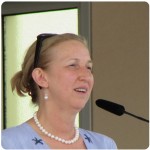 Marija Pavlovic was born on April 1, 1965. She has five brothers and sisters. She was 16 when she saw Our Lady for the first time on June 25, 1981. In 1993 she married Paolo Lunetti. They have four children, and live in Italy for part of the year, and then in Bijakovici, Medjugorje during the summer. Our Lady has entrusted her with nine of the ten secrets. It is through her that the monthly message for the parish and the world is transmitted on the 25th of every month. Our Lady asked her to pray especially for the souls in Purgatory and for religious nuns. She gives talks in Italy, in other parts of Europe, and near Birmingham, Alabama in the USA. While in Medjugorje she would sometimes speak to pilgrims in the St. John Paul II Hall (formerly named as the Yellow Hall). 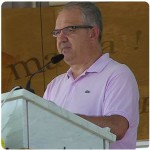 Ivan Dragicevic  was born May 25,1965. He has two brothers. He first saw Our Lady on June 24, 1981 when he was 16 years old. On the 23rd of October 1994 he married Loreen Murphy in Boston, MA, USA. They have three children, and live in the United States for part of the year, and then in Bijakovici, Medjugorje, during the summer months. Our Lady has entrusted nine of the ten secrets to him. In July of 1982 Our Lady began leading a prayer group through Ivan that gathered to pray twice a week. It is with this group that Ivan prepares to meet Our Lady on Apparition Hill or the Blue Cross on some Monday and Friday nights in the Summer. Thousands of pilgrims are present when this occurs. Ivan still receives daily apparitions. Our lady asked him to pray especially for priests and the youth. He travels quite a bit around the USA to give talks. While in Medjugorje, his talks are sometimes held in the St. John Paul II Hall (formerly named as the Yellow Hall). 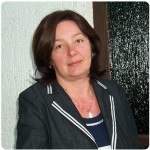 Ivanka Ivankovic was born on July 21, 1966. She has one brother and one sister. She was the first to see Our Lady on June 24, 1981 at the age of 14. She married Rajko Elez in 1986. They have three children, and live in Miletina, on the west side of Medjugorje. Ivanka received daily apparitions until May 7, 1985 at which time Our Lady entrusted to her the tenth secret, and promised to appear to her once a year on June 25th, the anniversary of the apparitions, for the rest of her life. This annual apparition takes place at her home. Our Lady asked her to pray especially for families. Ivanka very rarely speaks in public. 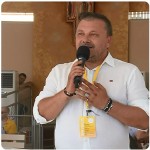 Jakov Colowas born on March 6, 1971. Our Lady first appeared to him on June 25, 1981 when he was 10. In 1993 he married Annalisa Barazzi. They have three children, and live in Bijakovici, Medjugorje. Jakov received daily apparitions until September 12, 1998 on which day Our Lady entrusted to him the tenth secret, and promised to appear to him once a year on Christmas Day. Our Lady asked him to pray especially for the sick. Jakov is slowly coming out of his shyness, and once in a while gives talks to pilgrims outside his house through an interpreter.