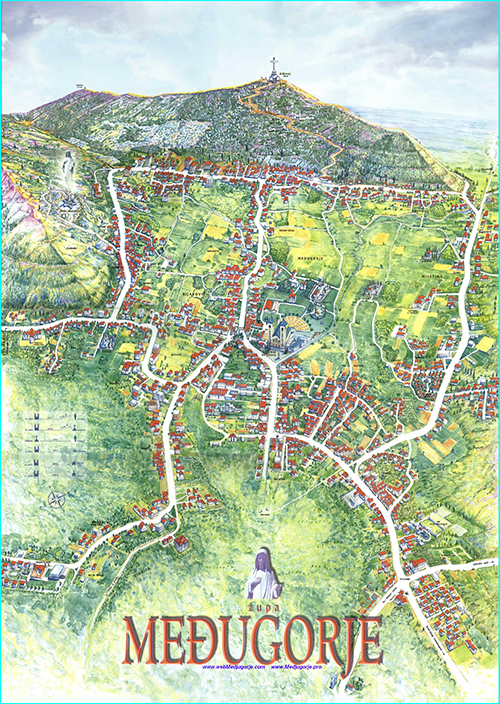 Medjugorje is a little village in Bosnia-Herzegovina where the Blessed Virgin Mary has been appearing to some youngsters since June 24 th, 1981. Her apparitions continue almost daily up to the present. She has not said when they will cease.

Mother Mary came in order to tell everyone to convert – to turn away from sin and return to God. She calls her children to strive for peace, to pray, fast, do penance, go to Confession, and believe in the Lord with strong faith.
Brief History

The Blessed Virgin appeared first to Ivanka Ivanković and Mirjana Dragičević. Later that afternoon, when she came again, Vicka Ivanković and Ivan Dragičević had tagged along.
The next day, on her third apparition, Marija Pavlović and Jakov Čolo were also present. This second evening, all six stayed to watch, listen and pray. Jakov was 10 years old while the others were just past their mid-teens.

At that time, Bosnia-Herzegovina was one of six states in a Communist federation known as Yugoslavia. The inhabitants of Medjugorje were Croatian Catholics and spoke the Croatian language. Religion was allowed under the constitution, but the authorities were rather suspicious of what was happening on the little hill where hundreds of people would gather during the apparitions. They arrested the six visionaries and had them tested by the local doctor. Nothing untoward was diagnosed. 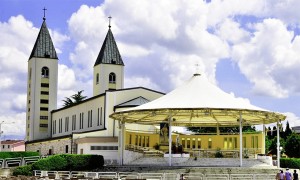 The parish priest at the local Franciscan church, Fr. Jozo Zovko, doubted the youths at first. But seven days later, while praying alone in the church, he heard a voice telling him to go out and protect the children. On opening the door, he met them fleeing from policemen, and hid them. From then on he began to believe. After this, the Communists watched him with eagle eyes and eventually accused him of preaching insinuations against forty years of atheistic rule. He was convicted and sentenced to three years in prison.

The apparitions persisted, and attracted thousands of pilgrims every year as news reports and films about the phenomenon proliferated around the globe. The seers were tested by psychiatrists from renowned institutions in France and Italy, and demonstrated to be of sound mind and body, and to be in states of ecstasy during their encounters with the Blessed Virgin. And from March 1984, Our Lady has been giving messages to the world through Marija – now once a month on the 25th.

Initially, the local ordinary, Bishop Žanić, looked favourably on the events, but an incident occurred which shattered this promising beginning. You see, for 415 years, Bosnia-Herzegovina fell under Turkish power. The diocesan priests abandoned their churches, while many Franciscan friars remained, undercover. These brave priests served the people in constant danger of arrest, torture and execution. Travelling in civilian clothes from village to village to administer the Sacraments, they pretended to be uncles on the maternal side (to account for differences in surnames). Over those four centuries, the people grew very attached to them. With the defeat of the Turks in 1878, diocesan priests slowly returned, decade by decade, to replace the Friars in the parishes. As each church was taken over, the faithful were understandably upset.

When two young Franciscans defied the bishop’s order to desist from serving their former parishioners, he defrocked them! Vicka asked Our Lady about the bishop’s decision, and got the answer that he had acted hastily. This, of course, infuriated the man and turned him against the visionaries from then on. [Ten years later, the two priests were exonerated by the Vatican.]

Thereafter, Bishop Žanić tried all he could to discredit the seers and the Franciscans, but, under the watchful eye of Pope John Paul II and his right-hand man, Cardinal Ratzinger, he failed to impress Rome. In 1991 a commission of the Bishops’ Conference of Yugoslavia met in Zadar, Croatia, to discuss this problem. The commission announced that it could not affirm the supernaturality of the events at Medjugorje, but designated the place as a shrine of prayer under the direction of the bishop. Pilgrimages to the shrine were permitted but must not be organized by the clergy – although priests and bishops could accompany the pilgrims as spiritual advisors.

During the war of independence (from 1991 to 1995, which resulted in the dissolution of Yugoslavia), and upon Bishop Žanić’s retirement in 1993, his hand-picked successor, Bishop Ratko Perić, took over the diocese and proved to be even more antagonistic towards the Franciscans. He went so far as to declare the supernaturality of the events at Medjugorje as false. The Vatican dismissed his claim, asserting that it represented the bishop’s personal opinion. His authority on the matter was taken from his hands and placed squarely on the shoulders of the Conference of Bishops of Bosnia-Herzegovina. This Conference has adopted a wait-and-see stance to this day, and is, by and large, not hostile.

It should be noted that while alleged apparitions are on-going, the Church normally does not grant authentication, as was the case at Fatima and Lourdes, for instance.

Opponents of Medjugorje distributed many fabrications and lies about the apparitions. Please be aware of this; pray, and do not be afraid.
Official Information

The Franciscan Friars have a web-site at www.medjugorje.hr. It is the most reliable source of news and archives.