Statue of the Risen Christ 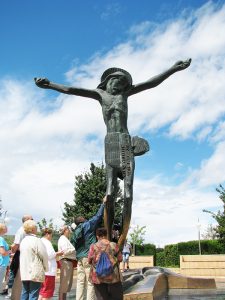 Behind the pews of the exterior altar is a footpath leading to several structures, one of which is the statue of the Risen Christ. This is a bronze/copper statue depicting Christ with His arms raised in triumph. On any given day, pilgrims can be seen lining up to get close to the statue, some with handkerchiefs in their hands, wiping a “liquid” that is oozing from just below the right knee. This phenomenon occurs in all kinds of weather, but the speed of the oozing varies. Sometimes it takes a few minutes before a single drop comes out, but at other times the dripping is faster. Many pilgrims treat this liquid as a miraculous substance, and claims of healing have been made. However, the Church has not ruled on the nature of this occurrence. Silence should be maintained here at all times.