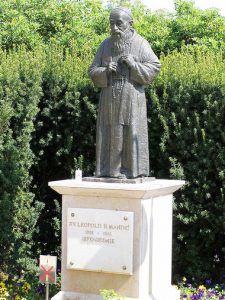 On the east side of St. James’ Church, next to the original row of confessionals, is the statue of St. Leopold Mandić, the patron saint of Confessions.  St. Leopold was born in Croatia in 1866, the youngest of 12 children. From an early age, he suffered many physical ailments, but that did not stop him from becoming a Capuchin priest. He was ordained in 1890.

His poor health prevented him from being sent abroad as a missionary, but he spent his time hearing Confessions and dispensing spiritual direction, sometimes up to 15 hours a day. He died while preparing for Mass in 1942. He was beatified in 1976 and canonized in 1983.

Pope Francis requested that the relics of St. Leopold be brought to Rome for the Jubilee Year of Mercy (2016), since he represented true mercy in action.