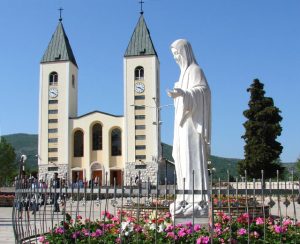 Medjugorje is a place of prayer and reconciliation. St. James’ parish (where the present church is located) was founded in 1892, and is still served by the Franciscan friars. The first church was built in 1897, but after the First World War, due to the unstable ground, it became unusable. Then, the parishioners began plans to build a new church, with two pointed towers, near the site of the old one. The new church was consecrated on January 19, 1969.

It is believed that the building of the new church was part of the Divine plan all along. At the time, the parish only consisted of 400 families, but St. James’ Church can accommodate more than two thousand people. Why did the parishioners build such a big church, and have it dedicated to the apostle Saint James the Greater, the patron saint of pilgrims? The answer points to the possibility that the Virgin Mary was preparing the parish of Medjugorje for its special role in the spiritual world. St. James’ Church is now the centre of sacramental and prayer life, not only for its parishioners, but also for pilgrims from all over the world.

At the entrance to the church grounds stands the stone statue of the Queen of Peace, the work of the sculptor Dino Felici.

A fenced-in park situated inside the traffic circle to the east of the Shrine reminds us of the place where the old parish church once stood. 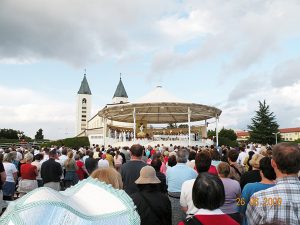 After the apparitions began in June 1981, pilgrims began flocking to Medjugorje. As a result, St. James’ Church was no longer big enough to accommodate all the pilgrims. In 1989 the exterior altar was built, and the surrounding prayer area (with about 5000 seats) is a place of gathering in the summer time and for big feasts, when thousands of pilgrims converge in Medjugorje.

The apparitions of Our Lady took place at many different locations, including St. James’ Church. The first apparitions within the parish grounds were inside the church in the little room to the right of the altar.

For three years, that side room became a regular site for the apparitions, followed next at Fr. Slavko’s office in the old rectory, and later at the choir loft located in the bell tower of St. James’. Lastly, the apparitions took place in the Adoration Chapel next to the church.

As each of the visionaries married, they began receiving Our Lady’s apparitions in their own homes. Marija built a private chapel next to her house. Ivan followed suit, and built a private chapel next to his home; this is where the daily apparitions occur when Ivan is in Medjugorje. The apparitions to Marija now take place in the hall beneath her guest retreat house. Vicka receives the apparitions in her own home. The daily apparitions to Ivanka, Jakov and Mirjana ceased several years ago, although Our Lady appears to them annually. Mirjana also sees Our Lady on the 2nd of each month.

Although Our Lady no longer appears in St. James’ Church, Her presence can still be felt through the many apparitions that have taken place over the years. 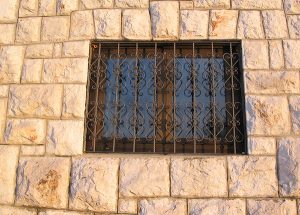 On the west side of St. James’ Church is the window of the little room which was frequently visited by Our Lady in the early years of the apparitions. At the time of the apparitions, it was not unusual to see people standing tip-toe near the wall, hoping to get a glimpse inside the room.

Holy Mass
The Mass is the focal point of prayer life in Medjugorje. Both Holy Mass and the prayer programme take place inside the church, or at the exterior altar in the summer, weather permitting. The programme is called the “International Evening Prayer Programme”, because people from many countries from around the world participate. The radio broadcasts simultaneous translation of the services from Croatian into many languages. English translation is available at 94.3 on the FM dial.

SUMMER SCHEDULE
The summer schedule of the Evening Prayer Programme in Medjugorje begins on May 1st.

WINTER SCHEDULE
A change in the time of the evening Prayer Programme takes place on September 1st till the end of April.

The schedules can change. It is best to check the times at the Information Office of the parish, or on the nearby notice screens.