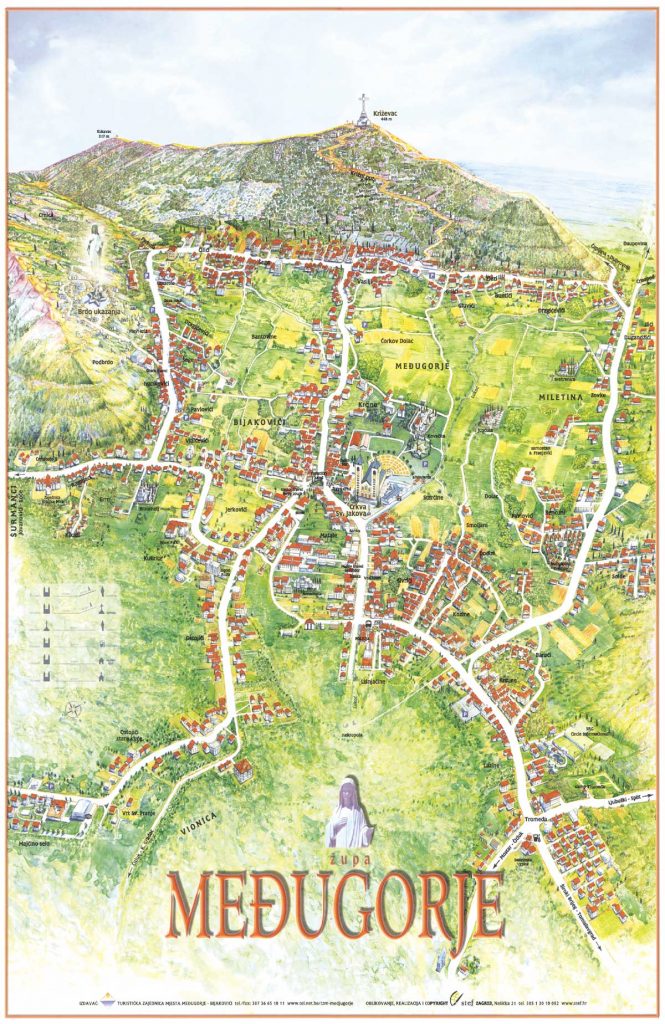 Unlike other maps, the top of this one is pointing in the South direction. The highest point in  Medjugorje is Cross Mountain, aptly named because of the large cross on its peak.

At the foot of it is a road running from east (left of the reader, where the sun rises in the morning) to west (right of the reader, where the sun sets during the evening prayer programme). From this road, coming towards the reader, are three roads. The one in the middle is the main one. On this main road about 100m down, is our hotel, Villa Panorama. 1.2km further down is St. James Church. That is the centre of Medjugorje.
Around the Church are the restaurants, souvenir shops, and the taxi stand. (A taxi ride costs 5euros to anywhere inside Medjugorje.)
From Villa Panorama one can walk to the Church in 15 minutes. But we have a coach which takes us to the Church and back twice a day — in the morning around 9:30, and back whenever the pilgrimage guide calls for it; and in the afternoon around 5:30pm and back at 9pm. But those times are variable according to our needs.
The coach is also hired for a couple of trips — once to Cenacolo (the drug rehabilitation centre featured in the film The Triumph) and the other probably to the Orphanage. We may also go outside of Medjugorje once for our Consecration to Mother Mary ceremony.
We usually have breakfast at 8 finishing around 9; this gives us time to tidy up our rooms before the coach arrives. Dinner is at 4:30, finishing before the coach comes to take us to the Church for the evening programme, which lasts from 6 to 9.