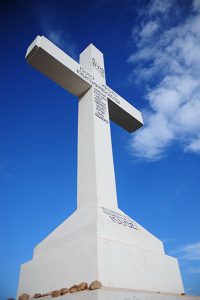 Križevac (or “Cross Mountain”) is the mountain on which the Medjugorje parishioners constructed a concrete cross, 8.5m high, in 1934.

The idea for the construction of a huge cross on Križevac came from the Vatican. At the time, Pope Pius XI proposed that crosses be built on hills and mountains all over the world to commemorate the 1900th anniversary of Jesus’ death on the cross. One of the priests who responded to that proposal was Fr. Bernardin Smoljan, the parish priest from Medjugorje. In January 1934 he presented this idea to his parishioners, who embraced it heartily. The work started soon afterwards, with parishioners carrying heavy loads on their hands and backs, trudging up to the top of the hill called Šipovac. With such enthusiastic support, the construction of the huge cement cross was completed in three weeks. On March 16, 1934, Fr. Smoljan blessed the cross, and celebrated Holy Mass on top of the hill, which has since been called Cross Mountain. In the last three decades, this mountain has become one of the favourite places visited by pilgrims in Medjugorje. Many pilgrims have climbed this mountain, praying the Stations of the Cross along the way. In the process, they have realized Jesus’ profound love for us in undergoing His passion.

Embedded in the concrete cross is a piece from the relic of the True Cross, the one on which Jesus was crucified, and venerated by Christians. The relic of the True Cross is housed in the Church of the Holy Cross of Jerusalem, in Rome, and the Medjugorje piece was a gift from Pope Pius XI. Since 1934, Mass has been celebrated on Križevac, on the first Sunday after the feast of the Nativity of Mary (the feast of the Exaltation of the Cross). 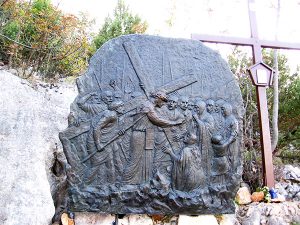