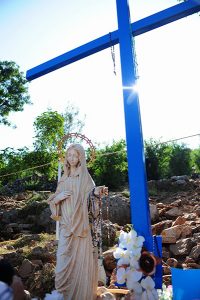 About 200 metres south of the beginning of the main path where pilgrims normally use for climbing up Apparition Hill is a small recessed area (40 metres from the road) with a blue cross erected on the site. This is the place at which Our Lady sometimes appears to visionary Ivan on Mondays and Fridays at night when he is there in the summer months. This is also where visionary Mirjana goes to in the morning of most 2nd day of each month, to receive a message from Our Lady.

Pilgrims (often in the thousands) gather here at those times.

A few metres to the left of this cross is a smaller blue cross where Our Lady appeared to the six visionaries in the early days when they hid from the Communist policemen trying to apprehend them. The first time was on the evening of July 27th, 1982.