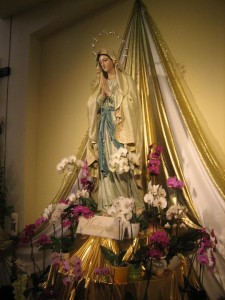 Our Lady of Lourdes inside St James Church

It is understandable that any of you reading the November 5, 2007 issue of Sports Illustrated focused only on the Red Sox winning the World Series (yeah, go Sox!) and missed the article on Alberto Salazar, whom I consider the greatest marathon runner of all time.  He survived a heart attack on June 30 in which “it took 8 shocks over 26 minutes for Salazar’s heart to beat.”  Two paragraphs in that article, on page 52, should not be missed.

“In 1990, during a pilgrimage to the Catholic shrine of Medjugorje in Bosnia, he (Salazar) awoke one morning to find that his set of rosary beads had turned from silver to gold.  Months before his heart attack he had given the wife of a neighbor in a coma a crucifix and rosary blessed, respectively, by Pope Benedict XVI and Pope John Paul II.  She put them on her husband’s nightstand, and he recovered.

After Salazar suffered his heart attack, that woman placed the crucifix by his hospital bed and wrapped the rosary in his hand.  They were the first things he saw when he came to.  Upon hearing  that another woman survived a heart attack while out running on the day he suffered his, Salazar passed the objects on again.  ‘I gave them to her parents while she was in a coma,’ he says.  She too has recovered.”