By the grace of God, Fr. Fu got onto the Apparition Hill 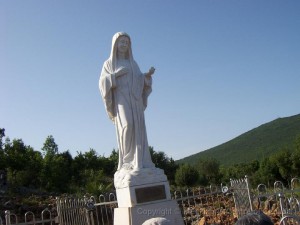 From the beginning, weeks before our pilgrimage began, Fr. Joseph Fu had insisted that he be admitted into the room during an apparition of Our Lady to any one of the Medjugorje visionaries. Of course, nobody in Toronto could guarantee anything. But he must have prayed fervently because his wish was fulfilled most unexpectedly, and benefited others besides himself.

Our pilgrims arrived in Medjugorje on the night of July 31st, 2008. Next morning, the orientation briefing was held behind St. James’ Church. This was unusual because the traditional meeting place would have been either near the statue of Mother Mary in front of the church, or at the benches by the 25 confessionals. Our guide decided it was too hot under the sun, and took us to the back where trees provided some cool shade.

Halfway through the talk, Miki Musa, the translator for visionary Mirjana, walked by towards the yellow hall. He got to the yellow hall and knocked on the glass door several times. No one opened it for him. While he paced back and forth, a thought occurred in my mind to approach him about letting our two priests be present at the apparition to Mirjana that was to take place the next morning, August 2nd.

He gave me a very warm three-cheek European welcome. It was a sign of gratitude. He was happy to see me because, back in May, for his university degree, he had asked me to fill in a questionnaire for his thesis. I had done it promptly on the same day. He said that because of my participation he got an “A.”

So I asked immediately, “Miki, in our group there are two priests; would you allow them into the apparition hall tomorrow?” He replied, “For priests, it is no problem; but no others.” 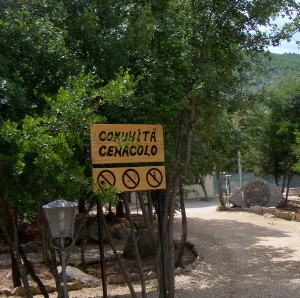 Next morning, the early risers ate breakfast at 5:30 and left for Cenacolo at 6. At 7:40, eight were still in the dining room. Just then, a fateful prompting came to heart – why don’t all eight go to meet Miki, and see if he would let everyone in. Worst comes to worst, six would stay outside anyway while the two priests go in.

Fortunately, it was relatively easy to flag down two cruising taxis. When we got to Cenacolo, Miki was nowhere in sight. The guard enquired which group we belonged to, and I answered, “Miki’s.” He called Miki on the mobile phone. As he started to describe our group, I was prompted to shout out to him, “It’s Andrew’s group.” Miki immediately told the guard to let us in!

If Miki had been at the door, he would have seen that the ‘group’ was not just two priests. Thanks be to God. Thanks be to Our Lady.

Thanks be to God also that Fr. Anthony was picked to lead one decade of the Rosary in his native Kenyan language. Thanks be to God that the happiest person in the hall that day was Fr. Joseph Fu. He was beaming with such a satisfied smile. His prayer was heard, his faith was rewarded, his dream had come true.

Here is Our Lady’s message from the apparition:

“Dear children, in my coming to you here among you, the greatness of God is reflected and the way with God to eternal joy is opening. Do not feel weak, alone or abandoned. Along with faith, prayer and love, climb to the hill of salvation. May the Mass, the most exalted and most powerful act of your prayer, be the centre of your spiritual life. Believe and love, my children. Those whom my Son chose and called will help you in this as well. To you and to them especially, I give my motherly blessing. Thank you.”