Provincial of the Herzegovinian Franciscan Province and former Pastor of Medjugorje

The media published in recent days a sensational news: that the Vatican began to square the accounts with the phenomenon called Medjugorje, and that the Pope himself called Medjugorje a fraud. In the background of this false information was the case of Fr. Tomislav Vlašić, punished by the Vatican for “spreading of doubtful doctrines, manipulation of consciences, doubtful mysticism, disobedience and fault against the sixth commandment (fornication)”. As this is a priest who used to serve in Medjugorje, the authenticity of Our Lady’s apparitions in Medjugorje was once again under suspicion. 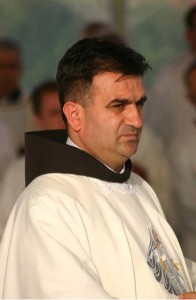 What says about this Dr. Fr. Ivan Sesar, Provincial of the Herzegovinian Franciscan Province and former Pastor of Medjugorje?
Dr. Fr. Ivan Sesar: I am surprised by these wrong, and I would even say malevolent, conclusions. It is well known that the Holy See is observing the events of Medjugorje with special attention, and that it has not pronounced any final judgment yet. The Vatican is not an institution that is squaring the accounts with anyone and with Medjugorje least of all.

The journalist Inoslav Bešker pushed even further and asked if precisely Vlašić “invented the apparitions”. What is the truth about the activities of Fr. Tomislav in Medjugorje?
This is an equally absurd assertion. It is well known and easy to prove that Fr. Tomislav was not serving in Medjugorje in June 1981, when the first apparitions began, as the six children said. He did not even know the children. He came to Medjugorje by the will of his superiors in September 1981, after Fr. Jozo Zovko has been arrested. He was working in the parish less then 4 years, in 1985, he was transferred to Vitina, and in 1988, he left for Italy.

Is the punishment that strikes Fr. Tomislav in any relation with his activities in Medjugorje? Mons. Ratko Perić, the Bishop of Mostar, is putting it in this context.
As much as I understood from the documents that I read, Fr. Tomislav Vlašić has been punished neither because of his former pastoral activities in the parish Medjugorje, nor because of the Medjugorje phenomenon, nor because of his personal attitude towards this phenomenon. When he was transferred from Medjugorje, the bishop did not take away from him any priestly faculties! I do not see the reason to connect this with his activities in Medjugorje or with the phenomenon itself, and even less reasons to interpret this as a negative attitude of the Vatican towards Medjugorje.

What is the position of the Herzegovinian Franciscan Province towards the case of Fr. Tomislav Vlašić?
In 1992, he officially joined the Italian Franciscan Province of Abruzzo, where he is living and working. This means that – since then – this Provincial house has no access to his occupations, and to what he is doing. According to the rules of our Order, he is not obliged to give an account about his activities to the Herzegovinian Franciscan Province of the Assumption of the BVM, and he has not done it. He is under the authority of the Provincial and the provincial Government of the province to which he belongs. I have never been officially informed about the details of his activities in Italy.

Is this commission going to be under Pope’s “patronage”, has any member been appointed yet?
As much as I have been informed unofficially, it is supposed to be an international commission to be appointed by the Holy See. As a provincial of the province to which the parish Medjugorje has been entrusted for pastoral care, and as a former pastor of Medjugorje, I declare that we are totally open and ready to collaborate with any commission appointed by the official Church. From the very beginning, the parish Medjugorje has been legally led by the Franciscans who, according to the rules of the Church, are appointed by the local Church authorities. The pastoral staff desires all the events to be in conformity with the rules of the Church and the doctrine of the Church. Medjugorje is not, as some think and say, “a project of some individuals or some groups”, but a graceful gift of Heaven offered to today’s people and humanity.

Is there anything happening “behind the scene”?
In Medjugorje, there is nothing secret or “behind the scene”, hidden from the public eyes. Everyone, a believer or an unbeliever, can come and see what is happening and why so large crowds of pilgrims from the whole world gather there. The numbers confirm that, in spite of everything, Medjugorje is today one of the most famous places of pilgrimage in the world in the Catholic Church, and an irresistible magnet for many who seek God.