How the Messages are Received and Reported

(Excerpt from Our Lady Speaks as a Mother, by Marija Stelzer-Dugandzic, pictured second from the right.) 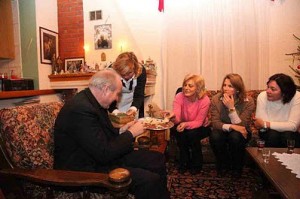 [The others, pictured from left to right: His Eminence Christoph Cardinal Schoenborn (Archbishop of Vienna), and visionaries Marija Pavlovic, Mirjana Dragicevic and Ivanka Ivankovic.]

Let us first pay attention to the visionary herself. To my question about how she receives the message, she answered, “I hear, I see, and I sense Our Lady. It is not like a dictation one receives from somebody; rather it is an experience drawing my whole being into it. The words themselves are already an experience by itself. If Our Lady says, ‘I am your mother; I love you’, she gives me such a convincing feeling that I can never express it completely in words. At the end of my ecstasy I need some time to be quiet so as to remember the experience and the message accurately.”

To my question whether she is normally happy with the words of a message, the visionary answered, “It is different. I can only say that I have never been able to convey my experience exactly.”

My next question took aim at the function of the priest to whom Marija normally first reports the message. It is to Father Slavko Barbaric, a Franciscan priest who has a doctorate degree in Psychology and Psychotherapy. Marija said, “Fr. Slavko reads the message. He discusses it with me if something is not quite clear to him. If there is any grammatical error, he corrects it. Occasionally he helps me find the most appropriate word for something. But he never changes anything without checking with me several times.” (INTERVIEW with Marija Pavlovic on 20 July 1996.)

The visionary has now been living in Italy for several years, and has a good command of the Italian language. But, according to her statement, Our Lady continues to speak with her in Croatian.

Vatican II describes the process of inspiration of the Bible in these words: “In composing the sacred books, God chose men, and while employed by Him they also made use of their own powers and abilities, so that with Him acting in them and through them, they, as true authors, consigned to writing everything, and only those things, which He wanted.” (DEI VERBUM 11). In the following article we read: “For the correct understanding of what the sacred author wanted to assert, due attention must be paid to the customary and characteristic styles of perceiving, speaking, and narrating which prevailed at the time of the sacred writer, and to the customs men normally followed at that period in their everyday dealings with one another.” (DEI VERBUM 12)

“If people are being addressed by God they are always able to perceive His words only in their own humanly-limited language. As well, they are only able to convey such words to others in a form according to the history and the contemporary meaning of their words… Even the words of Jesus, the incarnate Son of God, are subject to the laws and limits of human language.” (KREMER, Jetzt die Wahrheit leben, 34.)

“The fundamental realization of Biblical science tells us that even the books of the New Testament are not an exact record of the words and deeds of Jesus. Instead, we find in them the faith-experiences that the first Christian communities had made with the teachings, works and personality of Jesus. Basically, therefore, the books of the New Testament do not report a ‘pure’ knowledge of Jesus’ life, but rather that of the first Christians.” (ZULEHNER, Helft den Menschen leben, 46.)

“If this applies to the ‘prophetic’ inspiration of the Bible, then it does even more so to ‘private revelations’, for that is what we are dealing with at Medjugorje. A priori, we must therefore exclude the possibility that the visionaries receive the ‘messages’ like a telephone call from above. In every prophetic speech the totality of the human person is participating.” (MUHLEN, Medjugorje eine mystagogische Herausforderung, 38.)

What does Fr. Slavko say about his own function in the ‘composition’ of the messages? “My function is that of a spiritual director of a visionary or a person who believes she has a special mystical experience. It is the role of the priest to check the message in the light of the Bible and of the Church’s Tradition, and to correct any obvious grammatical errors. There is no other responsibility for the priest. Occasionally, I had to ask the visionary for the meaning of one thing or another, or whether a certain concept might not be better expressed by a more appropriate word. In all such cases I have made a change only with the complete agreement of the visionary. From the time that Marija Pavlovic took residence in Italy I have been receiving her message on the 25th of each month by telephone. Now and then it happens that I have to call her a few times to make sure I have understood the message correctly and that I can then pass it on. I also attend to the translation of the messages into different languages.”

What does Fr. Slavko say about his receiving the messages from the visionaries? “Because of my close contact with the visionaries I can only repeat what they are stressing, i.e. that there is no dictation or a telephone conversation. It is an experience in the very core of the heart. Marija told me that after every apparition she always needed a few moments to be quiet so as to remember the message. On some occasions the visionaries have told me that they are able to remember a message only once. If they had to write the message a second time they would have to copy it from the first text. That led me to believe that perhaps we have something like an impression here, something is deeply etched into them but vanishes as soon as they have written it down. I came to believe that the Croatian language – or any language for that matter – as a means of communication in the case of an apparition has no absolute value, but only a relative one. To this suggestion I received a unanimous negative reaction from all the visionaries. They are sure that Our Lady speaks to them in the Croatian language and that they hear her voice. This made me drop my suspicion that there may not be an actual language involved. Several times I noticed how difficult it was for Marija to convey the message exactly because it was not only a matter of mere words but also of a deep inner experience. From my observation I can say that each visionary conveys the message slightly differently. For example, one may give the message as an answer to a question that was asked of Our Lady. This is in line with the theory of inspiration in Scholastic Philosophy that everyone receives in his or her specific way–‘modo recipientis’.” (INTERVIEW with Fr. Slavko Barbaric on 28 July 1996.)

This agrees with the statements of Vatican II which point out that regarding the interpretation of an inspired text the faculties of the visionary and the influences of his/her surroundings must be taken into consideration.

After a word-for-word dictation has been ruled out, and after the function of the priest has been shown to be very limited, the conclusion may be drawn that the text of the messages in question is the fruit of an inspiration, of an inner experience, of human co-operation, and of some input of the visionary.

[Editor’s note: Since Fr. Slavko Barbaric’s death on November 24th, 2000, Marija Pavlovic normally telephones the message to Stipe Cavar at the Radio “Mir” Medjugorje office. Stipe (pronounced stee-pay, accent on the first syllable) writes it down, makes photocopies and distributes them to the international translation team waiting close by. Questions and clarifications are passed back and forth through Stipe via telephone connection with the visionary. Nancy Latta confirms that a single word may take up to 4 hours to translate.

Although the 2nd of the month messages to Mirjana are not properly translated by the translation team according to the above examining procedures, they are nevertheless printed on small pieces of paper by the Medjugorje Information Office staff, and handed out to pilgrims.]