The talk was in Italian, and translated into Croatian.
Part 1:
Part 2: 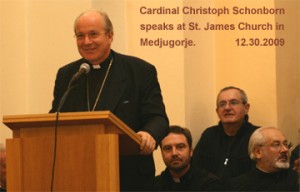 Praised be Jesus and Mary!

On December 30, 2009, Cardinal Christoph Schönborn, Archbishop of Vienna and a member of the Vatican’s Congregation for the Doctrine of the Faith, gave a powerful, lengthy talk at St James Church in Medjugorje.

The cardinal’s talk revolved around the theme of God’s mercy, and he did not hesitate to praise Medjugorje.

His first words as he stepped to the podium were “Hvaljen Isus i Marija,” a Croatian phrase that means “Praised be Jesus and Mary.” This is a common greeting among the visionaries and Medjugorje villagers. The cardinal repeated it several times and urged the crowd to repeat it with him.

He went on to say, “When you look at a place like Medjugorje, you can see a superpower of mercy. Many merciful deeds were born here or they were supported here.”

During one poignant moment of his talk, cardinal Schönborn urged the crowd to stand and join him in singing the well-known Medjugorje song Gospa Majka Moja. He smiled warmly as he sang along.

Delving further into the topic of mercy, cardinal Schönborn said, “What a deep feeling of compassion there is in Jesus. Many deeds of mercy in the Church were born exactly in this way, like Mother Teresa, who couldn’t accept people dying in the street; or Mother Elvira, here in Medjugorje, the founder of Cenacolo Community. She couldn’t stand to see young people destroying their lives with drugs. What is this deep, profound emotion that we call compassion?”

While concluding his talk in Medjugorje, the cardinal said, “I believe that many experiences in the Church demonstrate something that is impossible from a human point of view.”

While some had expected the cardinal’s visit to Medjugorje to be private, he has instead surprised the town by being very visible. He has spent his time concelebrating Mass at St James Church, climbing Apparition Hill with visionary Marija Lunetti, praying in silence at Adoration, and, perhaps most notably, giving his talk today in the parish church with the Franciscan friars at his side.