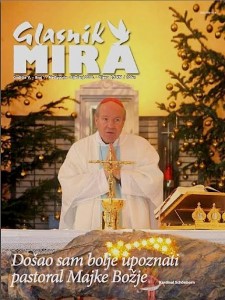 When asked if he had spoken about his pilgrimage to Medjugorje during his recent private meeting with Pope Benedict XVI, the cardinal said it is not customary to report on this form of audience but he could say that because of the public spotlight on his pilgrimage, Medjugorje has been a topic in Rome and his impressions have been reported.

As part of an exclusive interview published today by the Austrian Catholic news agency, kath.net, the Archbishop of Vienna, cardinal Schönborn, has spoken again about Medjugorje and made mention of a commission set up by the Holy Father.

Cardinal Schönborn added that he is very confident the commission appointed by the Holy Father to examine the events at Medjugorje will work very well and responsibly, and that the outcome will certainly be good. He also said he is confident that great prudence and sensitivity is being applied to a phenomenon that has attracted 30 million pilgrims and produced very good fruit, but also some unanswered questions.