Private Letters From JPII About Medjugorje

The following letters are taken from this book: 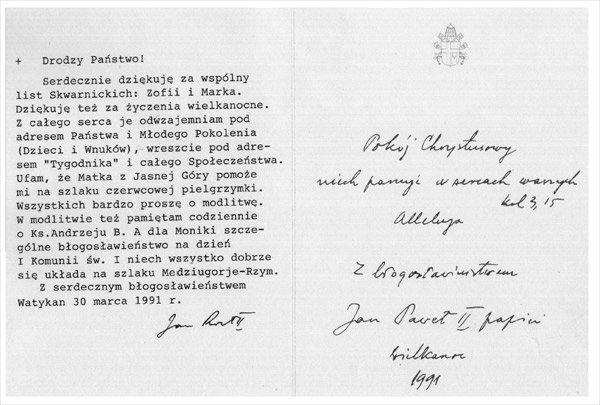 I cordially thank for the joint letter from the Skwarnickis: Zofia and Mark. I also thank for the Easter wishes. I return them with all my heart to you and the Young Generation (the Children and Grandchildren), and, eventually, to the Weekly and the whole Society. I trust that our Mother of Jasna Góra (the Bright Hill) will help me on the route of my pilgrimage in June. I do ask you for your prayer. I also remember in my everyday prayers about Father Andrew B. And I am sending a special blessing for Monica on the occasion of her First Holy Communion. And may everything work out fine on the Medjugorje to Rome journey.
With a heartfelt blessing,John Paul II
Vatican, March 30th, 1991

(in handwriting)
May the Peace of Christ reign in your hearts (Colossians 3, 15)
Halleluiah!
Blessingly,John Paul II, the Pope
Easter 1991 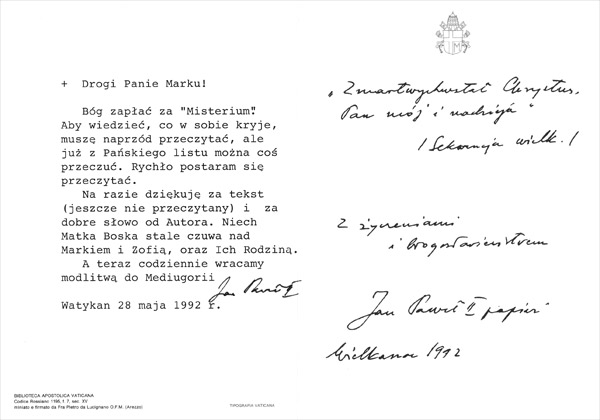 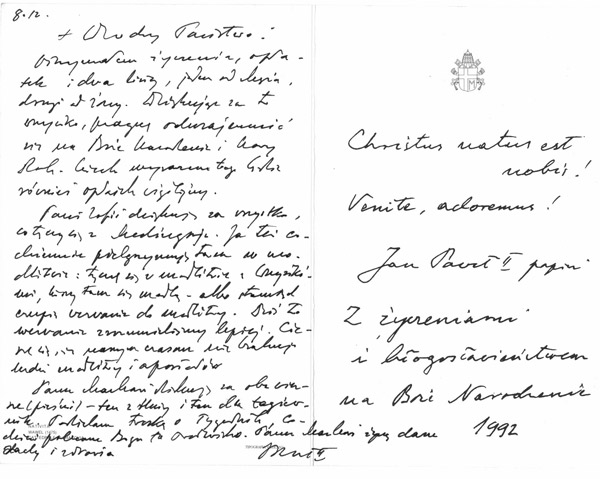 December 8, 1992 (this letter was written in the pope’s own handwriting) :

“…I thank Mrs. Zofia for everything concerning Medjugorje. I ,too, go there every day as a pilgrim in my prayers: I unite in my prayers with all those who pray there or receive a calling for prayer from there. Today we have understood this call better. I rejoice that our time is not lacking people of prayer and apostles…” (p. 107)
John Paul II

“I thank you very much for the both letters. Mrs. Zofia is writing me about the Balkans. I guess Medjugorje is better understood these days. This kind of “urging” of our Mother is better understood today when we see with our very eyes the enormousness of the danger. At the same time, the response in the way of a special prayer – and that coming from people all around the world – fills us with hope that here, too, the good will prevail. Peace is possible – such was the motto of the day of prayers of January 23rd, prepared by a special session in Vatican in which Mr. T. Mazowiecki also participated.

Perhaps it is thanks to this as well that Europe is coming back to its senses. People in Poland get back to their senses, too, as follows from your writing. Maybe it will become easier for them to come to terms with the Pope who has not preached “the victory of democracy” but reminded them of the Decalogue…” (p. 119) 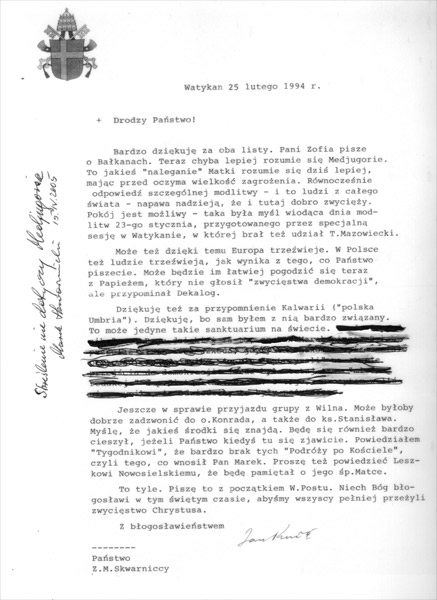