Dogma of the Assumption and the miracle of the sun 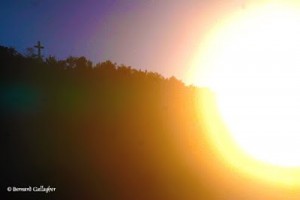 The dogma of the Assumption of the Blessed Virgin Mary was declared by Pope Pius XII on November 1, 1950 and states that “the Immaculate Mother of God, Mary ever Virgin, when the course of her earthly life was finished, was taken up body and soul into the glory of heaven.”

In this declaration no position is taken by the Church as to the question of whether Mary actually died. However, in one of her very early messages given at Medjugorje, Our Lady gave this answer to one of the seers when asked if she went to Heaven before or after death: “I am the Mother of God and the Queen of Peace. I went to Heaven before death.” October 12, 1981

Four years ago a previously unpublished document came to light which revealed Pope Pius XII had witnessed the “miracle of the sun” on four occasions and he considered this experience as confirmation of his plan to declare the dogma of the Assumption. The information contained in this handwritten note by Pius XII went on public display for two months in the Vatican in November 2008.

Reporting at the time for zenit.org Antonio Gaspari wrote: 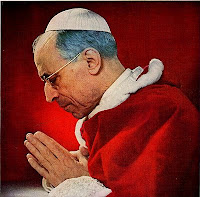 According to his own testimony, the Pope who declared the dogma of the Assumption saw the “miracle of the sun” four times.

This information is confirmed by a handwritten, unpublished note from Pope Pius XII, which is part of the Pius XII: The Man and the Pontificate display.

A commissioner of the display and a Vatican reporter for the Italian daily Il Giornale, Andrea Tornielli, explained to ZENIT that the note was found in the Pacelli family archives. It describes the “miracle of the sun,” an episode that until today had only been affirmed by the indirect testimony of Cardinal Federico Tedeschini (1873-1959), who recounted in a homily that the Holy Father had seen the miracle.

Pius XII wrote, “I have seen the ‘miracle of the sun,’ this is the pure truth.”

The miracle of the sun is most known as the episode that occurred in Fatima, Portugal, on October 13, 1917. According to the Fatima visionaries, Mary had said there would be a miracle that day so that people would come to believe. Thousands had gathered at the site of the visions, and the sun “danced,” reportedly drying instantaneously the rain-soaked land and spectators.

Pius XII’s note says that he saw the miracle in the year he was to proclaim the dogma of the Assumption, 1950, while he walked in the Vatican Gardens. He said he saw the phenomenon various times, considering it a confirmation of his plan to declare the dogma.

The papal note says that at 4.00pm on October 30, 1950, during his “habitual walk in the Vatican Gardens, reading and studying,” having arrived to the statue of Our Lady of Lourdes, “toward the top of the hill […] I was awestruck by a phenomenon that before now I had never seen.”

“The sun, which was still quite high, looked like a pale, opaque sphere, entirely surrounded by a luminous circle,” he recounted. And one could look at the sun, “without the slightest bother. There was a very light little cloud in front of it.”

The Holy Father’s note goes on to describe “the opaque sphere” that “moved outward slightly, either spinning, or moving from left to right and vice versa. But within the sphere, you could see marked movements with total clarity and without interruption.”

Pius XII said he saw the same phenomenon “the 31st of October and November 1, the day of the definition of the dogma of the Assumption, and then again November 8, and after that, no more.”

The Pope acknowledged that on other days at about the same hour, he tried to see if the phenomenon would be repeated, “but in vain – I couldn’t fix my gaze [on the sun] for even an instant; my eyes would be dazzled.”

Pius XII spoke about the incident with a few cardinals and close collaborators, such that Sister Pascalina Lehnert, the nun in charge of the papal apartments, declared that “Pius XII was very convinced of the reality of the extraordinary phenomenon, which he had seen on four occasions.”

As Pope, in 1940, Pius XII approved the Fatima apparitions, and in 1942, consecrated the entire world to the Immaculate Heart of Mary.

• Solar phenomena is repeatedly witnessed by pilgrims at Medjugorje.