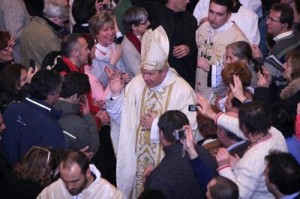 Pilgrims flock around a statue of Mary at Medjugorje. (Reuters)

In an interview with Reuters on Tuesday, Cardinal Vinko Puljic of Vrhbosna,  president of the bishops’ conference of Bosnia, said he expects the Vatican will soon release a directive — perhaps before the end of this year — that will address the Marian apparitions that allegedly are occurring at Medjugorje.

Our Rome correspondent Edward Pentin is monitoring the issue closely, and will report in more detail if and when it is confirmed that Rome does intend to address aspects of this controversial issue in a new document. To date, the Vatican has neither confirmed nor rejected the validity of the apparitions reported at Medjugorje.