A statement was released by the Holy See on Wednesday confirming the formation of a commission to investigate the “phenomenon” of Medjugorje.

The Vatican communique reads: “Under the auspices of the Congregation for the Doctrine of the Faith, under the presidency of Cardinal Camillo Ruini, an international commission of investigation on Medjugorje has been constituted. Said Commission, composed of cardinals, bishops and experts will work in a reserved manner, subjecting the results of their studies to the authority of the Dicastery.”

Vatican spokesman, Fr Federico Lombardi, said that no other information was available at this point besides the role of Cardinal Ruini as president. However, he did say that the commission will be formed by “more or less” 20 members.

Responding to a question from a journalist about the possible inclusion of Bishop Ratko Peric of Mostar, whose diocese includes Medjugorje, Fr Lombardi said that he is not in possession of a list of members.

The Vatican spokesman reviewed the history of investigations into the possible Marian apparitions of Medjugorje, noting that they began on a diocesan level. When it was seen that the “phenomenon was broader than the diocese,” it was passed on to the episcopal conference of the former Yugoslavia, which, he noted, no longer exists.

The commissions at those levels never came to a conclusion on the question of whether or not the alleged apparitions are supernatural, so the bishops of Bosnia and Herzegovina have asked the CDF to take over investigations, the Vatican spokesman explained.

As the commission carries out their activities, Fr Lombardi continued, they will decide whether or not to communicate information regarding their findings. Nevertheless, it can be assumed that it will be a “very discreet” project “given the sensitivity of the subject,” he remarked.

Speaking in Italian, he said to expect that investigations will take “a good while” to reach their completion and emphasized that the results of the commission’s activities will be submitted to the CDF, under whose mandate they are operating. The commission will only offer their technical findings to the Congregation, which in turn will “make decisions on the case.”

For now, the composition of the commission is “reserved,” as is the method they will pursue in their investigations, Fr Lombardi said in closing. 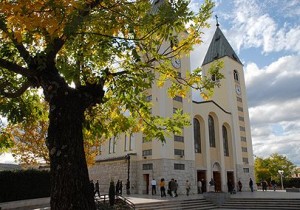